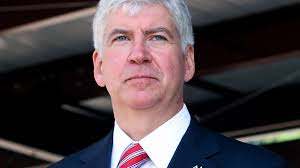 The 48th Governor of Michigan

Richard Dyle Snyder famously known as Rick Synder is the 48th governor of Michigan. Besides being an American politician, he is also a business executive, venture capitalist, attorney. His tenure of Governance was from 2011 to 2019.

Before serving as a Governor is the Chairman of the board of Gateway, Inc. Rick also co-founded Ardesta, LLC, a venture capital firm. He is a supporter of the Republican Party and was also a preferred candidate for the vice-presidential run of 2012 but eventually got replaced.

Rick Snyder was born on August 19, 1958. He was raised by father Dale F. Snyder and mother, Helen Louella Snyder in Battle Creek, Michigan.his parents have two children, and he is the youngest one. He and his sister both were raised in Battle Creek.

Rick and his sister both attended high school from Lakeview High School in Calhoun County. He was a very intelligent student and earned 23 college credits. Due to his immense intelligence, the admission director of the University of Michigan suggested creating his own degree. In 1977, he earned Bachelors in General Studies degree with distinction, an M.B.A degree in 1979 and a JD degree in 1982 from the same university.

After leaving the University Rick Snyder started his career by working as an employee with Coopers &amp; Lybrand. He worked with them from 1982 to 1991. Eventually, after a year he got promoted to partner and then partner-in-charge. Before working as an employee, he worked in the University of Michigan as an adjunct assistant professor of accounting. In1991 when he left the office, he started to work as a vice president for Gateway. From 1996 to 1997, Rick worked as the president. In 2005, he was promoted to the chairman of the board for 2 years. In 2006, he was also carving as an interim CEO of the gateway. Later he left the job in 2007 as the gateway got sold. Snyder then established his own venture capital company called Avalon Investments and moved to run several organizations such as Ardesta LLC and HealthMedia.

Before entering into politics Rick Snyder had never been assigned to public office. In 2010, he ran for the position of governor of Michigan. He was running from the Republican Party. In the 2010 election, he was against Virg Bernero, the mayor of Lansing, and three minor party candidates.

He again won the election but it was a tough call with Democrat Mark Schauer. Rick eventually won with 50.92 per cent votes in the election. In the 2018 election, he was denied due to the term limits for the third term. His tenure as the governor of Michigan started in January 2011 and ended in 2019. In 2012, Rick Snyder was a possible candidate for the Vice President of the United States but was not selected. Instead of Rick, Paul Ryan was selected.

Rick Snyder is married to Sue. Sue and Rick tied their knot in 1987 at Cherry Hill Presbyterian Church in Dearborn, Michigan. Together they have three children. He and his family live in Ann Arbor, Michigan. They have been married for 29 years.

Richard Dyle Snyder is 62 years old. He celebrates his birthday on August 19. As of 2020, his estimated net worth is $220 million.